The trap of the therapeutic uroboros 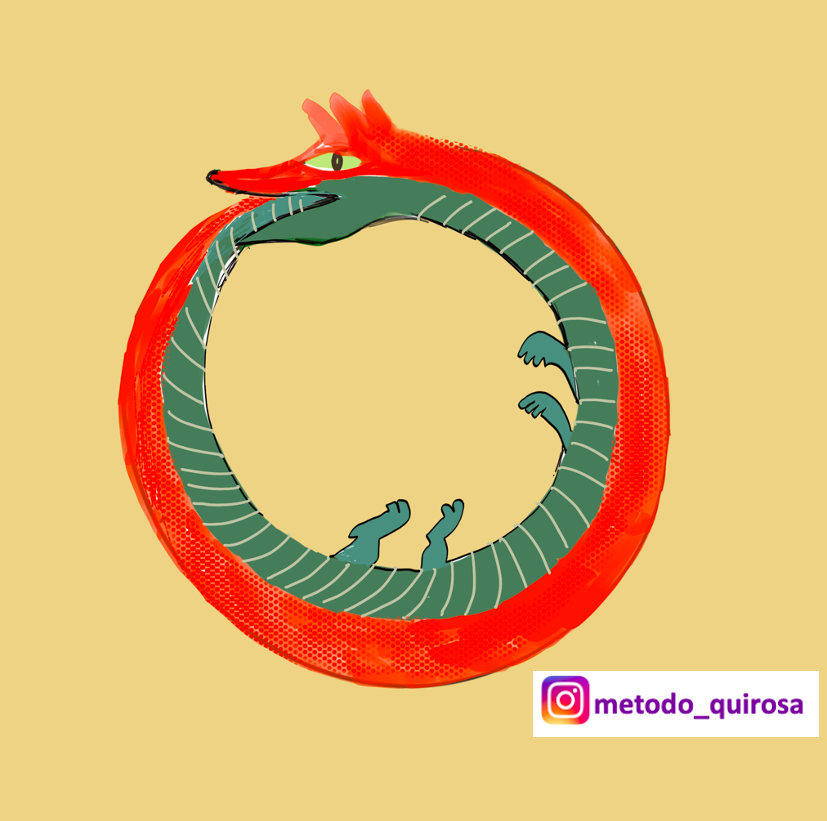 Throughout our lives there are countless moments and situations in which we can find ourselves trapped in a negative psychological-behavioural dynamic.

For instance, substituting one person for another when we suffer a romantic breakup, or substituting one substance for another when we try to overcome an addiction, or trying to calm our hunger or anxiety with ¨miraculous¨ products when we decide to eat healthier and reduce excessive eating. There exists a series of ¨therapeutic¨ – note this term in its etymological origin as related to calming, attend or alleviate – behaviours that a person can engage in with the intention of feeling better.

However, the changes that a person undergoes towards a more fulfilling life, be it imposed or freely chosen, inexorably involve a period of emptiness, of discomfort in which thoughts such as ¨it’s not worth the effort¨, and ¨why should I suffer like this is life is already hard as it is? ¨ arise in the mind. Sometimes even physical pain may emerge in this phase. This phase or phases could be compared with the individual steps of a staircase which we must ascend, step by step, if we want to reach the higher levels of personal improvement. Dear reader, I’m sorry to tell you if you haven’t already realised it, but there are no shortcuts in life.

Other types of dependence

Before we discuss emotional dependence, and other types of dependence, I would like to introduce the symbol of uroboros, or ouroboros, to help explain how we succumb to the spiral of avoidance. In addition, drawing from its symbology I will explain how to free ourselves from repetitive dynamics that can ultimately lead us into a vortex of personal destruction that drives us away from the fulfilling life we truly want. What is the ouroboros? It is an ancient symbol that represents a dragon or snake devouring itself from the tail. The myth was introduced in the west through the Greek magic culture and it has been used to represent rebirth or fertility, but also to exemplify the eternal struggle or unending useless effort which leads us nowhere.

What is the therapeutic ouroboros? In my day to day job as a psychologist and after careful evaluation of the variables that initiate and maintain the problems of my clients (I prefer this terms to patients or users) I would like to share some lessons with you that I have learned with regards to this dysfunctional psycho-behavioural dynamic. This ¨ouroboros dynamic¨ leads them to engage in futile actions which make them fall again and again into the same trap of behaving in the same dysfunctional ways, and what’s more, it makes their psychological problems chronic. It is a self-reinforcing process, in other words, behaviours that attempt to avoid discomfort are reinforced negatively because they diminish or alleviate private events (memories, thoughts, bodily sensations and feelings) which increase the likelihood of such behaviours taking place in the future. Furthermore, what we try to eliminate disappears temporarily only to return, each time, with increased intensity. These are what we call ¨immortal¨ sensations, or sensations which can never be extinguished because they are part of being human, and so, as long as we are alive we will experience them.

Therefore, we could understand the therapeutic ouroboros as a strategy which I have observed in my clinical practice which many people resort to under the pretext of not wanting to be in contact with their discomfort. A clear example can be observed in those people who want to quit smoking, substituting cigarettes for nicotine patches, and yet despite their best efforts, their smoking cravings remain. Overcome by the craving, sadly and mistakenly, they returning most of the times, to the cigarette, harming their health in the process and moving away from their true values, goals and dreams. Due to the unconscious and immortal nature of the desire, they will want to satisfy such desire, and alleviate such restlessness and craving by smoking more cigarettes. But this smoking habit can come into conflict with their value of desiring better health and so once again, they will consider quitting. That will be when they move from the patches to the gum, then to audio therapy, electronic cigarettes, hypnosis, food, or even some form of witchcraft or shamanism because it apparently ¨worked¨ for a friend of a cousin of someone they know. The habit of smoking is very complex, mainly due to the fact that internal triggers (feeling overwhelmed, anxious, euphoric at a party, or stressed) combine with external triggers (having a coffee or a beer, being surrounded by friends who also smoke, etc.). I want to emphasise that I use the word trigger and not the word cause precisely because the mental-emotional-physiological state of stress can in certain people contribute to the decision of lighting up a cigarette, but it will never be the cause of smoking because us humans have the unique ability of short-circuiting the relationship ¨I am stressed – I light up a cigarette¨. For those interested, I will discuss free will in more depth in an upcoming article.

Although someone quits temporarily aided by nicotine patches, they could still be influenced by some of the aforementioned triggers and decide to light up a smoke, entering a cycle which substitutes on a constant basis, one thing for another in order to evade discomfort and returning again and again to the very habit he is attempting to stop. We can observe this phenomenon in people who attempt to evade feelings of loneliness or indifference by going from one sentimental relationship to another, like Tarzan, who hanged tightly onto a vine and wouldn’t let go until he has the next one firmly in his grasp so as to not fall into the void. No doubt, it worked for Tarzan, but does it work for you? I mean, going from one relationship to another without taking the space and time to process the loss and integrate the lessons from each relationship may help you in the short term to stop you falling into that void and evade feelings of loneliness after a breakup, but it does not allow to build edifying, satisfying relationships. The people you have these relationships with are not the problem, the problem is letting your own despair take control of your choices. It important to develop the habit of stopping on a regular basis and taking the time to reflect on what you truly want for yourself. Failure to do so is the root of the problem, for deciding from a mental state of despair and hopelessness doesn’t prove to be a very effective lifestyle policy.

If you are reading this article and have decided you really want to leave behind that therapeutic uroboros for good, substituting cigarettes for food, or gum, Juan for Pepe, or the anxiety drug for calming herbal drinks, I encourage you to continue reading the articles I will publish soon.